Finally here! I must confess I had not big expectations but mainly curiosity about what was going to happen here. Why did God send us here? Well, we were ready to figure it out.

I arrived the evening of the first day, so Lars picked me up from te airport and I joined the team the next morning. Once together, we went to a couple of touristic destinations expecting actually to find God’s direction, not to go sightseeing.

First stop was the Temple Mount, were two huge mosques are located. We were wearing shorts, and it is not allowed for Muslims to show your knees at their holy places, so we were demanded to wear skirts. Yes, skirts. We were not allowed in the Mosques, nor were we allowed to speak loudly, raise our hands, or mention Jesus’ name on the areas around the mosques. After walking around for quite a while and seeing some meaningful places (like the gate through which Jesus will walk into Jerusalem, which is blocked with stones to hinder him, or the Mount of Olives full of tombs of Jews who paid a lot of money to be there and resurrect first when the Messiah descends there), I couldn’t wait any longer and started making contact with Ismael, an Arab teenager who was there selling stuff.

I asked him for some flyers titled “What is Islam?,” since I was quite curious about their own presentation of their faith. That gave me a door to start chatting with him. I asked him if he could bring me into the mosques, which were patrolled by quite loud and unfriendly guards. He told me he couldn’t, but he made me climb onto some windows and look inside. When the guards started shouting in Arabic and walking towards us, he shouted back and acted goofy… it worked. From the inside some people got quite upset too, but we could leave before it became a scandal. Finally, now feeling more comfortable, I went to talk to him about Jesus and trying to pray for him, but he got scared and brought a teacher of Islam to talk to me. Then Torben showed up with Lars and told me we had to leave fast because we had to pick up Lebo’s filming microphones from the security gate, since they didn’t allow us to bring them in, and they were about to go home. So… I didn’t get to pray for Ismael, but at least I started warming up and getting a feel of the radicalism of Muslims over there.

After that we went to the Wailing Wall. There we found mo 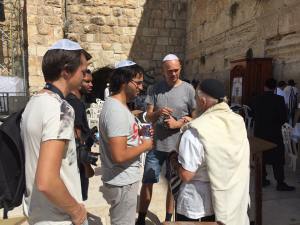 re radicals, but now radical Jews. We had to wear a Kippah, a beanie over our heads. There they were, different groups of Jewish believes, clearly distinguishable by their outfits. We got the chance to talk to one of them for quite a while, who was quite eager to explain us about his faith and history… till we mention Jesus. Big argument started, very impolite attitudes from his side… and again we just had to leave, we were heading nowhere with that conversation.

We tried to talk to people on the street, and we came across many other radical believers: Catholics, Orthodox Christians, and so on. I was impressed by how zealous each one was in defending their own ideas, though many were also intolerant and rapidly offended when they figured out we believed something different.

Nevertheless, Torben got the chance to pray for some Muslim teenager while on the Temple Mount… and that became the lead for the beginning of some action on the days to come. But more on that on my next post.