I could tell a lot of stories and details about what happened the next days, but now I just want to give you the highlights of the next days in Israel. I have tried to be honest and transparent about the times when the guidance is not clear, and when you just do what you know while you wait for his Spirit to talk. But now, to the point: what DID God do through us in the days after.

We got a call from someone that lived in Bethlehem, and this time it was the right lead. He and his mother were Orthodox Christians, and he longed to be baptized but his church kept on procrastinating on it and he needed freedom and healing so badly. So we went to Palestinian territory again! I like this kind of action for Jesus.

We arrived at his house, and prayed for him, his mother and a lady friend of theirs. We prayed for healing and baptism in the Holy Spirit for the mother, but though she received it, she could not make it to speak in tongues (not then at least). Then we wanted to show him the healing power of the Holy Spirit, and we went to the Nativity church to kickstart him. 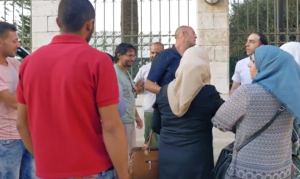 As we were walking out of the church, we started approaching tourists, but come on… this is the place were Muslims need to hear about Jesus! So we started praying for two Muslim ladies, wearing their characteristic outfit. They were both healed, and one was set free from a demon just out there. Other men saw it, and action got lose. 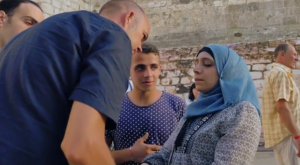 One by one they started coming by to see what was going on between us and the Muslim ladies. Oh oh. Danger? No way! They also asked for prayer! Everyone got healed! Then the police came by… to ask for healing in the name of Isa! (Jesus in Arabic). And like in our Lord’s times, what happened next amazed us all: they started calling their families and friends, and they came with cars bringing all their sick ones to us. We got a crowd of about 100 people to pray for!

That evening, on our way back, we had an appointment with a Muslim boy who had contacted Torben through Facebook. He was demon possessed, and addicted to watching videos or people being killed and tortured in horrific ways. He felt darkness all around him, and was scared of losing his mind. He was convinced he was demon possessed.

So we met at an Arabic neighborhood in the Arab side of Jerusalem. He was just under his twenties, and brought a friend with him. They were both very scared. We explained the good news of Jesus to them, and proceeded to pray for the troubled young man. Unfortunately, we were praying for deliverance on an Arab compound and it wasn’t long before the family of the house we were standing in front of arrived and got quite upset. So we had to stop praying and moved aside. We continued praying on a dark corner, and some children between 10 and 12 came by and started goofing and making jokes, till they turned aggressive. Then they called their 20+ year old friends, and then the young guys we were praying for told us to run… so we all did, otherwise we would get beaten or arrested. We could not finish the prayer, so we had no idea if what we did was effective… till the next day. Then we got the following message:

On another day we went to Capernaum, a place full of biblical happenings. As we approached the entrance, we saw a couple of Latino tourists from the US approaching the gates of the city. They were elderly, and the man was sitting on a wheelchair. Somehow I knew he would get healed. Once in the ruins of this ancient city, Torben approached them. It wasn’t long before this man was walking! It was incredible. They even offered money to us!

A while later, and after having approached many people, I was still feeling there should be some more. I saw a blond girl in her twenties, sitting down. I am not very keen on approaching young girls, but I felt I had to talk to her. So I asked God: “Lord, if this is what I am supposed to do, please give me something solid to approach her.” So He said: “Pain on the right knee.” Then I went to her and asked her about her right knee and the pain. She was in shock, got healed, and could share the gospel with her. I love those experiences!

In between we worked hard sharing the gospel in Jericho, at a souvenir shop at the baptism place by the Jordan river, in the desert where they believe Jesus fasted, we were chased by shepherd dogs of Bedouin shepherds, where I twisted my ankle badly (nothing good prayer wouldn’t fix), were caught in a small sand storm, went to the Red Sea and the Dead Sea, filmed some shots for the next movie, and saw many healings and God gave us some words of knowledge. We filmed as well at the Garden Tomb, where some American dancers were healed and filled with the Holy Spirit, and two elderly Canadian men were deeply touched and one of them was as well filled with the Spirit of God.

On our last day in Israel we had an appointment to 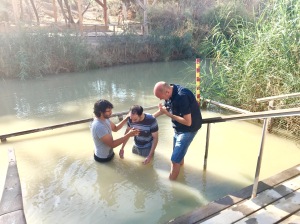 baptize our Orthodox friend from Bethlehem. We went with him and his family to the Jordan river and baptized him. Very nice experience, despite all those soldiers around you. I didn’t know that if you cross that little wooden fence in the water you risk getting shot, because you are illegally crossing the border with Jordan. And if you walk out of the roads you might blow up, because the area, despite its beautiful scenery, is full of land mines. I love that country! Some days later we heard that he was healed from his skin disease and that his mother was speaking in tongues. God never fails when there is true repentance!

After this baptism we would leave to the country of Jordan, where some American missionaries were waiting for us. Before leaving, my good Palestinian friend that I met in Spain wanted to see me, but unfortunately we could not wait, we had to leave. But I left a present for him at the souvenir shop, where the clerk had gotten healed some days ago. Not much later, he picked it up and sent me this photo: 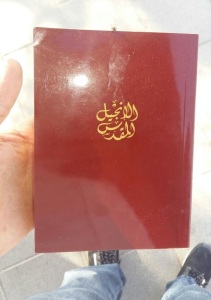 I left a copy of the Injil (New Testament) in Arabic for him. I sincerely hope he will read it and that God will speak to him through it.

So this is the best of a lot of crazy adventures and beautiful testimonies. A lot of walking through streets, and approaching people of all ages, religions and backgrounds. God did amazing things, but most of all, He taught us a lot there.

7 thoughts on “At Israel, heart of religions, last and best part”