Having fellowship in South Africa with my dear brothers 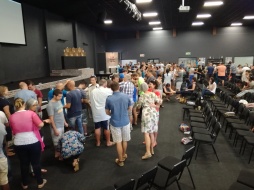 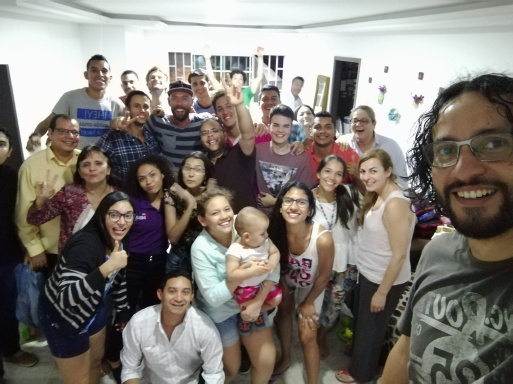 The team in Colombia, from Spain, Curacao, the Netherlands and Australia. Also the church we helped, who has taken the task and are working hard there.

2018 has been a roller coaster so far. Awesome lessons learned as we keep on working for the King. In January I led the PTS school in Voorthuizen, the Netherlands, and started to apply some of the things the Lord had been showing me about church, discipleship and fellowship, seeing amazing results. February was just insane, traveling to Colombia, South Africa, and Turkey, besides the premier of the new movie The Last Reformation: The Life, which I had the privilege to be part of. And in April I went to Puerto Rico, feeling that it was the end of the mission God had sent me out to fulfill in January 2017. Besides all of this, the meeting with the underground movement that put a lot of the revelations about discipleship and church in a much more clear order.

Then came the so far typical season after a lot of hard work: the pause. Till now, every time a mission has finished, God has given me time to recover and to heal from hurts in myself and my wife and kids. Being gone so often and fighting separate battles takes slowly its toll on us. At the same time, this prepares us for the next chapter and the next mission, and gives us time to plan a new strategy, repent of mistakes made, and put the lessons learned in a clear way to be shared with all of you. There’s no better school than living the life of a disciple.

So I am planning to make a separate page in this blog with some of the lessons I have learned about discipleship and church, but there is one thing I want to share here with all of you.

When we read the bible, we can see 4 clear different movements that took place. All of them different in birth, development, leadership, and strategy. Nevertheless reaching the same result every time: local disciples being made, multiplying churches being planted, and apostles being sent to open new territories. So what can we learn from them, if they were all different? Can we come up with a method or pattern? Should we make rules and definite missionary models? Is this a manual to be blindly followed, or a revelation that shows us how the Holy Spirit leads his workers?

Trevor, the founder of those 20,000 underground churches in a purely Islamic territory, taught me something very important. We need to see what were the principles behind their practices. To put it another way, let’s compare it to families. In functional families, all parents want technically the same for their kids: that they become independent, that they can look after themselves, earn their own money, and leave home to have their own families. But how does that work in each home? Within certain healthy boundaries, it can be totally different from home to home, and nation to nation. It varies according to the age of the children as well, and the personality and talents of the parents. It adapts to the nation’s culture, but with a limit that will not compromise or risk the children’s welfare.

Thinking this way, if I copied the rules that a healthy functional Asian family has into my own South-American/North-European family ignoring the culture, personality and circumstances of my own family,  I would hurt my kids in many ways. But if I understand what those parents want to reach, I can develop my own practices in order to reach the same results. This way of thinking I call Fruitful Principles, while Trevor calls it Fruitful Practices.

In the last year I have tried different ideas and read some good books, but struggled to use them wisely due to my not understanding this. I read Miraculous Movements and had a deeper look at the Disciple Making Movements (DMM) approach. I also took a look at Training for Trainers (T4T), Church Planting Movements (CPM), and my wife read the ideas of Wolfgang Simpson. We heard teachings and read books from Marco Gmür and Florian Bärtsch, church planters in Switzerland that have made a huge impact on many fellow workers. We read The Luke 10 Manual, from Stephen W. Hill, an amazing book as well. We copied some ideas, tried some of our own, but we kept on failing because we looked at the practice instead of the principle.

So on the next post, I will share my short journey with home groups so far, and I hope it will bring some practical light into this.